With an outstanding reputation that has seen them selected for the most challenging applications, 60 of Howe Green’s 7500 Series Floor Access Covers were specified for the Northern Ticket Hall extension of King’s Cross Underground Station, London.

For the development of the Northern Ticket Hall, a sizeable extension of King’s Cross Underground station, London, the specification of materials had to be carefully considered. To provide access to essential underfloor services, access panels that offered fire resistance along with the ability to withstand massive amounts of foot traffic were required. With an outstanding market reputation that has seen them selected for the most challenging applications, over 60 of Howe Green’s 7500 Series Floor Access Covers were chosen.

Situated beneath ground between the newly redeveloped St Pancras Station and King’s Cross Station, the new entrance and Ticket Hall to King’s Cross Underground will lessen passenger journey times and ease congestion considerably. It is the second phase of a larger scheme that has also seen the addition of a ticket hall at the front entrance to St Pancras Station. The developments will cater for the added demand required by new mainline and Eurostar services – especially crucial in the run up to the 2012 Olympics.

The scheme was designed by Capita Architecture and overseen by a joint venture between Balfour Beatty Civil Engineering and Balfour Beatty Engineering Services. DMC Contracts, a division of the DMC Group specially developed to provide specialised services to London Underground and Network Rail, was responsible for all internal works. This included the screeding and tiling of tunnels and the screeding, floor and wall tiling of the Ticket Hall – including the installation of Howe Green’s Access Covers.

Specification was carefully considered for every element of the scheme. Not only did every product need to stand up to the most severe wear – especially with regards to flooring – it also had to have excellent fire safety standards.

This was especially true for the Floor Access Covers. It was crucial that they prevented the passage of fire through service channels, as well as protecting their vital contents – including ventilation ducting, electrics, communication cables and rail services.

Howe Green 7500 Series Floor Access Covers are third party fire certified for two hours on integrity and one hour for insulation* in line with BS 476: Part 22. Many other service covers cannot boast this degree of protection to certified standards. Alongside this, they are shown to tolerate the most extreme foot – as well as vehicle – trafficking. Howe Green’s products are frequently specified for prominent and highly trafficked projects, and have been used on many London Underground and overland rail schemes, including the redevelopment of St. Pancras Station.

Two types of Howe Green’s 7500 Series Stainless Steel covers were used on the project. As well as single covers, the company’s innovative multipart covers were also used. A series of panels set into one larger frame, they grant simple access to complex junctions of service utilities. Crucially – especially given their installation on the London Underground – all Howe Green Access Panels are available as tamper-resistant units, ensuring complete security, with special lifting keys provided for ease of access.

Alongside the security, durability and fire performance qualities that make them ideal for use on specialised projects such as the London Underground, Howe Green 7500 Series panels have other key advantages. They are non-corrosive and will not rust. They can also be infilled with cements and screeds, allowing them to be exactly matched to flooring – whether it’s timber, terrazzo or carpeting.

To install the panels, operatives from DMC Contracts, one of the UK’s leading flooring contractors, set them flush into the floor substrate. As the covers follow the floorline exactly, they represent no trip hazard. The cover panels were then filled with Ardex A35 rapid screed and completed with tiles specially manufactured for the London Underground. The pattern of the tiles was exactly matched to the surrounding flooring pattern, ensuring an uninterrupted and aesthetically pleasing surface.

At a depth of 75mm and available in a range of sizes, every Howe Green 7500 Series Access Panel is made to order at no extra time or cost. To ensure that the products were a perfect match, Howe Green’s technicians also visited the site to check measurements and ensure that the access panels were suitable.

As well as providing its access panels, the company also delivered a range of bespoke, precision engineered steelwork to DMC Contracts, on their King’s Cross flagship project. This included mosaic trims to form expansion joints, carefully engineered to accommodate the shape of the tunnels, and Stainless Steel tile edge and corner protectors.

Providing the fire safety, hardiness and security required by the London Underground – as well as a host of other beneficial attributes – the King’s Cross scheme illustrates the suitability of Howe Green’s leading products for the most demanding schemes. For this reason they have developed a reputation amongst specifiers, designers and installers alike as the market’s foremost access panels.

* This test is for use of the cover in a dead load environment only and being completely filled with C40 Concrete. If a surface finish is applied, such as tile, then the insulation times must be disregarded. 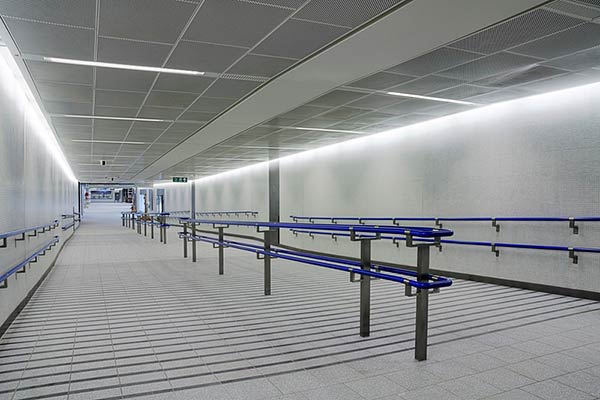